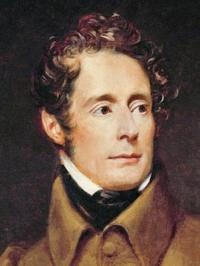 Lamartine (1790-1869) was a French writer, poet and politician who was instrumental in the foundation of the Second Republic and the continuation of the Tricolore as the flag of France.
Lamartine made his entrance into the field of poetry by a masterpiece, Les Méditations Poétiques (1820), and awoke to find himself famous. He was made a Chevalier of the Legion of Honour in 1825. He worked for the French embassy in Italy from 1825 to 1828. In 1829, he was elected a member of the Académie française. He was elected a deputy in 1833. In 1835 he published the "Voyage en Orient", a brilliant and bold account of the journey he had just made, in royal luxury, to the countries of the Orient, and in the course of which he had lost his only daughter. From then on he confined himself to prose.
He published volumes on the most varied subjects (history, criticism, personal confidences, literary conversations) especially during the Empire, when, having retired to private life and having become the prey of his creditors, he condemned himself to what he calls "literary hard-labor in order to exist and pay his debts". Lamartine ended his life in poverty, publishing monthly installments of the Cours familier de littérature to support himself. He died in Paris in 1869.

Nobel prize winner Frédéric Mistral's fame was in part due to the praise of Alphonse de Lamartine in the fortieth edition of his periodical Cours familier de littérature, following the publication of Mistral's long poem Mirèio. Mistral is the most revered writer in modern Occitan literature.

Lamartine is considered to be the first French romantic poet (though Charles-Julien Lioult de Chênedollé was working on similar innovations at the same time), and was acknowledged by Paul Verlaine and the Symbolists as an important influence.
FILTER BY
SORT BY
Sort By