Benjamin Graham (May 8, 1894 – September 21, 1976) was an American economist and professional investor. Graham is considered the first proponent of value investing, an investment approach he began teaching at Columbia Business School in 1928 and subsequently refined with David Dodd through various editions of their famous book Security Analysis. Disciples of value investing include Jean-Marie Eveillard, Warren Buffett, William J. Ruane, Irving Kahn, Hani M. Anklis, and Walter J. Schloss. Buffett, who credits Graham as grounding him with a sound intellectual investment framework, described him as the second most influential person in his life after his own father. In fact, Graham had such an overwhelming influence on his students that two of them, Buffett and Kahn, named their sons, Howard Graham Buffett and Thomas Graham Kahn, after him.
Format
paperback
Language
english
Condition
new
used 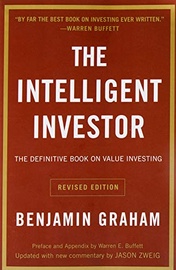