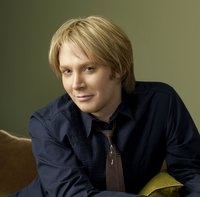 Clayton Holmes "Clay" Aiken, né Grissom, is an American pop singer who began his rise to fame on the second season of the television program American Idol in 2003. RCA Records offered him a recording contract, and his multi-platinum debut album Measure of a Man was released in October 2003. He released four more albums on the RCA label: Merry Christmas with Love, A Thousand Different Ways, and the Christmas EP, All is Well. His fourth studio album (the first album of original material since 2003's Measure of a Man), On My Way Here was released on May 6, 2008.

In the years following his American Idol appearance, Aiken has launched eight tours, authored a New York Times best-selling book Learning to Sing: Hearing the Music in Your Life with Allison Glock, and was the executive producer for a 2004 televised Christmas special, A Clay Aiken Christmas. He has been a frequent talk show guest, particularly on The Tonight Show and Jimmy Kimmel Live. He appeared as a guest star on Scrubs and participated in comedy skits on Kimmel, Saturday Night Live and 30 Rock.

Aiken created the National Inclusion Project (formerly the Bubel/Aiken Foundation) in 2003, accepted a UNICEF ambassadorship in 2004, and in 2006 was appointed for a two-year term to the Presidential Committee for People with Intellectual Disabilities.

Aiken made his Broadway debut playing the role of Sir Robin in Monty Python's Spamalot in January 2008. His run ended in May but he rejoined the cast as Sir Robin in September and remained through January 4, 2009.