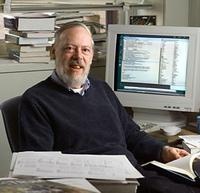 For many years, I worked in the Computing Sciences Research Center of Bell Labs. On October 2005, a reorganization redistributed this group, and I'm now with the center called by the slightly ungainly name of Convergence, Software and Computer Science Laboratory (but still in the same office). This experience has been more varied than it might seem; here's some of the history:

When I joined in 1967, Bell Labs was a corporation jointly owned by American Telephone and Telegraph Company and its subsidiary Western Electric. Its official name was Bell Telephone Laboratories, Incorporated.

Soon after, Ken Thompson, together with me and others, first started work on Unix. Also soon after, AT&T, which still owned most of the Bell System, updated its logo (I doubt the events were related). The new logo just updated the image; corporate structure remained the same. The material published by us during the period up to 1984 used this Bell logo and the name "Bell Laboratories."


In 1984, AT&T, under a negotiated consent decree, divested the local telephone companies it had owned and in the process gave up the Bell logo and the Bell name except in connection with Bell Laboratories. Bell Telephone Laboratories Inc. was dissolved as a corporation and became an integrated unit of AT&T. We lost the Wehrmacht helmet and gained the Deathstar, and now identified ourselves as working at "AT&T Bell Laboratories."


In 1996, AT&T (this time voluntarily) spun off its systems and technology organizations into Lucent Technologies, while AT&T kept the services business. Bell Labs stayed mostly with Lucent, though some of our colleagues helped form a new AT&T labs, much as some of us went to Bellcore in 1984. The new corporate logo usually includes the line "Bell Labs Innovations."

Lucent and Alcatel merged as of Dec 1, 2006. Another new name and logo! and still the same office.

Bell Labs has remained a remarkably good place to do work that has enduring impact over the long run, no matter what the company, the courts, the PR types or upper management decide should be our name and logo on a given day or year.