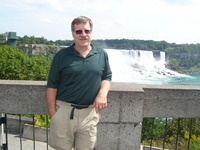 Being born and raised in the Niagara Frontier, I grew up on the Upper Niagara River and spent my formative years as a ‘river rat’, not in awe, but in fear of the mighty Cataract, viewing it as a threat to my Upper river escapades. More than once, myself and my fellow rates barely escaped the swift current while tubing down the river or fishing off of Navy Island in a rubber raft. The Falls was not to be marveled at or held in great esteem but were held in great fear and were to be avoided at all costs.

That perspective changed the first time I went down into the gorge below the Falls (during summer of course – I wasn’t as crazy my ‘boys’ were to go in winter) and “discovered” the lower river. There, like Saul on the road to Damascus, I was overcome by the wonder of the river and consumed by the mystery of it.

I learned that there were actually two rivers, the “Upper Niagara” and the “Lower Niagara” which were as different as night is from day. One was an open spigot, empting out all the ‘Great Lakes’ in a roar and ravaging thunder – the other was life-force, cutting and craving across the earth, leaving a trail of history, raw beauty and attitude.

Born in Buffalo, raised in Riverside/Blackrock, it was only after returning from a tour of duty in Southeast Asia that I located to Niagara Falls and Lewiston. Living there for over forty years, my enchantment with ‘Niagara’ was expanded by touring, exploring and inhaling the joy of the ‘Lower’ river.

Much has been written about Niagara, most centered on the mighty ‘Falls’ itself, little on the Niagara Gorge and the ‘Lower’ river. Truly amazing, when one considers the extensive and exciting history that engulfs the entire ‘Niagara Escarpment’. Focused on making a living for my family, I wrote for myself over the years. This story, now I give to you. I hope you enjoy reading it as much as I have in writing it.

Living now in Michigan, my heart remains down in the gorge, watching - feeling - listening to the "words of the water". My prayer, like 'the hermit' is that I too can learn the lessons the water holds.