< Back to author list
Donaldo Pereira Macedo (born 1950) is a Cape Verdean-American critical theorist, linguist, and expert on literacy, critical pedagogy and multicultural education studies. Until 2019 he was Distinguished Professor of Liberal Arts and Education at the University of Massachusetts Boston. He was also the founder of the Master of Arts Program in Applied Linguistics at the University of Massachusetts Boston, and chaired the program until approximately 2012.He has published extensively in the areas of linguistics, critical literacy, and bilingual and multicultural education. His work in translating and editing works of Paulo Freire, his published dialogues with Freire, and his own research on Freire's pedagogy, have significantly contributed to the field of critical pedagogy. Macedo co-authored two books with Freire, Literacy: Reading the Word and the World (1987) and Ideology Matters (2002). His other publications include: Literacies of Power: What Americans Are Not Allowed to Know (1994), Dancing With Bigotry (with Lilia Bartolome, 1991), and Critical Education in the New Information Age (with Manuel Castells, Ramón Flecha, Paulo Freire, Henry Giroux and Paul Willis, 1999). He also served as the editor for and contributed an introduction to Noam Chomsky's Chomsky on Miseducation (2000).
Format
hardcover
Language
english
Condition
new
used 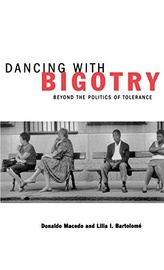 Dancing With Bigotry: Beyond the Politics of To...