Edward Judson (1844-1914) was an American Baptist clergyman, born at Moulmein, British Burma, a son of the missionary Adoniram Judson and his second wife, Sarah Hall Boardman. He graduated in 1863 at Brown University, in 1868 was appointed professor of Latin and modern languages in Madison (now Colgate) University, in 1874-75 traveled abroad, and after being ordained to the Baptist ministry in the latter year was pastor of a church at Orange, N. J., until 1881. Thereafter to the time of his death he occupied the pulpit of a New York City church, first known as the Berean Church, later as the Memorial Baptist, and finally as the Judson Memorial, Dr. Judson having erected a large building on Washington Square to house the congregation, equipped with the facilities of an "institutional" church. He lectured on theology at the University of Chicago (1904–06) and on Baptist principles and polity at Union Theological Seminary (1906–08) and was made professor of pastoral polity at Colgate. In 1899 he published a Life of his father, and he wrote also The Institutional Church.
Format
paperback
Language
english
Condition
new
used 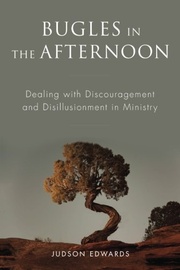 Bugles in the Afternoon