Edward Ayers is President Emeritus of the University of Richmond, where he now serves as Tucker-Boatwright Professor of the Humanities. Previously Dean of Arts and Sciences at the University of Virginia, where he began teaching in 1980, Ayers was named the National Professor of the Year by the Carnegie Foundation for the Advancement of Teaching in 2003.

A historian of the American South, Ayers has written and edited 10 books. The Promise of the New South: Life After Reconstruction was a finalist for both the National Book Award and the Pulitzer Prize. In the Presence of Mine Enemies: Civil War in the Heart of America won the Bancroft Prize for distinguished writing in American history and the Beveridge Prize for the best book in English on the history of the Americas since 1492. He was awarded the National Humanities Medal in 2013.

A pioneer in digital history, Ayers created "The Valley of the Shadow: Two Communities in the American Civil War," a website that has attracted millions of users and won major prizes in the teaching of history. He serves as co-editor of the Atlas of the Historical Geography of the United States at the University of Richmond's Digital Scholarship Lab and is a co-host of BackStory with the American History Guys, a nationally syndicated radio show and podcast.

Ayers has received a presidential appointment to the National Council on the Humanities, served as a Fulbright professor in the Netherlands, and been elected to the American Academy of Arts and Sciences
Format
paperback
Language
english
Condition
used
new 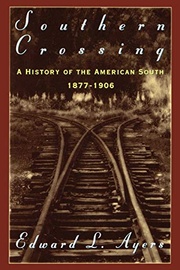 Southern Crossing: A History of the American So... 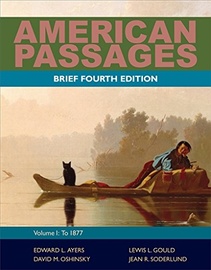 American Passages: A History of the United Stat...