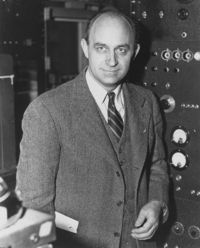 Enrico Fermi was an Italian-American Physicist, creator of the world's first nuclear reactor, the Chicago Pile-1. He has been called the "architect of the nuclear age" and the "architect of the atomic bomb". He was one of the very few physicists in history to excel both theoretically and experimentally. Fermi held several patents related to the use of nuclear power. He was awarded the 1938 Nobel Prize in Physics for his work on induced radioactivity by neutron bombardment and the discovery of transuranic elements.

He made significant contributions to the development of quantum theory, nuclear and particle physics, and statistical mechanics. attended a local grammar school, and his early aptitude for mathematics and physics was recognized and encouraged by his father's colleagues, among them A. Amidei. In 1918, he won a fellowship of the Scuola Normale Superiore of Pisa. He spent four years at the University of Pisa, gaining his doctor's degree in physics in 1922, with Professor Puccianti.

Soon afterwards, in 1923, he was awarded a scholarship from the Italian Government and spent some months with Professor Max Born in Göttingen. With a Rockefeller Fellowship, in 1924, he moved to Leyden to work with P. Ehrenfest, and later that same year he returned to Italy to occupy for two years (1924-1926) the post of Lecturer in Mathematical Physics and Mechanics at the University of Florence.

In 1926, Fermi discovered the statistical laws, nowadays known as the «Fermi statistics», governing the particles subject to Pauli's exclusion principle (now referred to as «fermions», in contrast with «bosons» which obey the Bose-Einstein statistics).

In 1927, Fermi was elected Professor of Theoretical Physics at the University of Rome (a post which he retained until 1938, when he - immediately after the receipt of the Nobel Prize - emigrated to America, primarily to escape Mussolini's fascist dictatorship).

In 1944, Fermi became an American citizen, and at the end of the war (1946) he accepted a professorship at the Institute for Nuclear Studies of the University of Chicago, a position which he held until his untimely death in 1954.
FILTER BY
SORT BY
Sort By