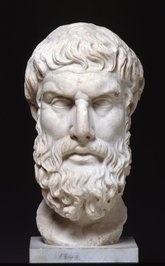 Epicurus (Greek: Ἐπίκουρος, Epikouros, "upon youth"; Samos, 341 BCE – Athens, 270 BCE; 72 years) was an ancient Greek philosopher and the founder of the school of philosophy called Epicureanism. Only a few fragments and letters remain of Epicurus's 300 written works. Much of what is known about Epicurean philosophy derives from later followers and commentators.

For Epicurus, the purpose of philosophy was to attain the happy, tranquil life, characterized by aponia, the absence of pain and fear, and by living a self-sufficient life surrounded by friends. He taught that pleasure and pain are the measures of what is good and bad, that death is the end of the body and the soul and should therefore not be feared, that the gods do not reward or punish humans, that the universe is infinite and eternal, and that events in the world are ultimately based on the motions and interactions of atoms moving in empty space.

His parents, Neocles and Chaerestrate, both Athenian citizens, had immigrated to the Athenian settlement on the Aegean island of Samos about ten years before Epicurus' birth in February 341 BCE. As a boy he studied philosophy for four years under the Platonist teacher Pamphilus. At the age of 18 he went to Athens for his two-year term of military service. The playwright Menander served in the same age-class of the ephebes as Epicurus.

After the death of Alexander the Great, Perdiccas expelled the Athenian settlers on Samos to Colophon. After the completion of his military service, Epicurus joined his family there. He studied under Nausiphanes, who followed the teachings of Democritus. In 311/310 BC Epicurus taught in Mytilene but caused strife and was forced to leave. He then founded a school in Lampsacus before returning to Athens in 306 BC. There he founded The Garden, a school named for the garden he owned about halfway between the Stoa and the Academy that served as the school's meeting place.

Even though many of his teachings were heavily influenced by earlier thinkers, especially by Democritus, he differed in a significant way with Democritus on determinism. Epicurus would often deny this influence, denounce other philosophers as confused, and claim to be "self-taught".

Epicurus never married and had no known children. He suffered from kidney stones, to which he finally succumbed in 270 BCE at the age of 72, and despite the prolonged pain involved, he wrote to Idomeneus:

"I have written this letter to you on a happy day to me, which is also the last day of my life. For I have been attacked by a painful inability to urinate, and also dysentery, so violent that nothing can be added to the violence of my sufferings. But the cheerfulness of my mind, which comes from the recollection of all my philosophical contemplation, counterbalances all these afflictions. And I beg you to take care of the children of Metrodorus, in a manner worthy of the devotion shown by the young man to me, and to philosophy." 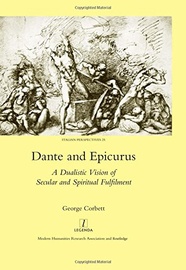 Dante and Epicurus: A Dualistic Vision of Secul...