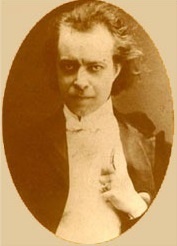 Ernest Hello (4 November 1828 – 14 July 1885) was a French Roman Catholic writer, who produced books and articles on philosophy, theology, and literature.

Frail from infancy, he also suffered from a spinal or bone disease. This struggle probably tinged his prose with a melancholy strain, which is strikingly original as mentioned in J.-K. Huysmans' work (they shared a veneration of the mystic John of Ruysbroeck). Both writers, like Leon Bloy, are almost impossible to translate. In 1857 he married Zoë Berthier, an army officer's daughter and talented writer herself, who was ten years older and a friend for some years before their marriage. She became his devoted nurse, which brought upon herself abuse from gutter journalists of the time for her estimable guardianship.

Hello's work is somewhat varied in form but uniform in spirit. His best-known book, Physionomie de saints (1875), which has been translated into English (1903) as Studies in Saintship, does not display his qualities best. Contes extraordinaires, published not long before his death, is more original, being often cited for its artistic yet lucid prose.

But Ernest Hello is mostly remembered now for a series of philosophical and critical essays, from Renan, l'Allemagne et l'atheisme (1861), which was re-published in an enlarged edition posthumously, through L'Homme (1871) on life, art and science in relation to present-day life (it was in its 7th edition by 1905), and Les Plateaux de la balance (1880) to the posthumously published Le Siècle, probably his master-work.

The peculiarity of his standpoint and the originality and vigour of his approach make his studies, of Shakespeare, Hugo and others, of abiding importance as literary "triangulation," the results of object, subject and point of view.
His interest in the application of philosophy and theology for the modern human condition is an enduring exploration, and indeed steps beyond the stricter parameters of Church thinking to speak to those seeking a way to live as well as fashion a creative perspective.
FILTER BY
SORT BY
Sort By