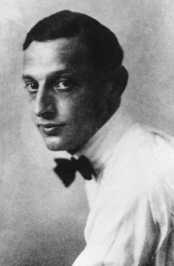 Kantorowicz was born in Posen (Polish: Poznań, then in Prussia) to a wealthy, assimilated German-Jewish family and as a young man was groomed to take over the family business (primarily liquor distilleries). He served as an Officer in the German Army for four years in World War I, he decided not to return to the business world, but went instead to study philosophy at the University of Berlin, at one point also joining a right-wing militia that fought against Polish forces in the Greater Poland Uprising (1918-1919) and helped put down the Spartacist uprising in Berlin.[1] The following year, he moved to the prestigious University of Heidelberg to study history with Karl Hampe and Friedrich Baethgen, two noted medievalists. While in Heidelberg, Kantorowicz became involved with the so-called Georgekreis, a group of artists and intellectuals devoted to the German poet and aesthete Stefan George and who shared an interest in art, literature and Romantic mysticism.

His association with the elitist and culturally conservative Georgekreis inspired Kantorowicz's unorthodox, aesthetic-cultural biography of the great Holy Roman emperor Frederick II published in German in 1927 and English in 1931.[2] Instead of offering a more typical treatment of laws, institutions and important political achievements, the book took a decidedly poetic turn, portraying Frederick as an idealized spiritual, as much as political, leader of the German nation. The work elicited a combination of bewilderment and criticism from the mainstream historical academy. Reviewers complained that it was literary mythmaking and not a work of serious historical scholarship. As a result, Kantorowicz published a hefty companion volume (Ergänzungsband) in 1931 which contained detailed historical documentation for the biography.

Despite the furor over the Frederick book, Kantorowicz received an appointment to an academic chair at the University of Frankfurt. In 1933, Kantorowicz had to resign his university position due to Nazi racial policies. Upon leaving, he took up a teaching position for a short time at Oxford before moving to the University of California, Berkeley in 1939. After a controversy prompted by his reaction to McCarthyism (he refused to take a loyalty oath required of all UC employees), he moved to the Institute for Advanced Study in Princeton. Not long after arriving in Princeton, he published his masterpiece, The King's Two Bodies (1957), which explored, in the words of the volume's subtitle, "medieval political theology." In particular, the book traced the ways theologians, historians and canonists in the Middle Ages and early modern period understood the office and person of the king, as well as the idea of the kingdom, in corporeal and organological terms. The figure of the European monarch was a unique product of religious and legal traditions that eventually produced the notion of a "king" as simultaneously a person and an embodiment of the community of the realm. The book remains a classic in the field.

Kantorowicz was the subject of a controversial biographical sketch in the book Inventing the Middle Ages (1991) by the late Canadian medievalist, Norman F. Cantor. Cantor, who knew Kantorowicz at Princeton, suggested that, but for his Jewish heritage, Kantorowicz (at least as a young scholar in the 1920s and 1930s) could be considered a Nazi in terms of his intellectual temperament and cultural values. Cantor compared Kantorowicz with another contemporary German medievalist, Percy Ernst Schramm, who worked on similar topics and was a member of the Nazi Party. Kantorowicz's defenders (particularly his student Robert L. Benson)[3] responded that although as a younger man Kantorowicz embraced the Romantic ultranationalism of the George-Kreis, he had only disdain for Nazism and was a vocal critic of Hitler's regime.
FILTER BY
SORT BY
Sort By