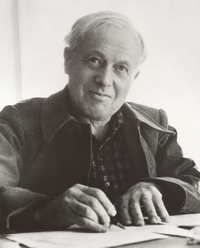 Eugen Rosenstock-Hüssy (July 6, 1888 – February 24, 1973) was a historian and social philosopher, whose work spanned the disciplines of history, theology, sociology, linguistics and beyond. Born in Berlin, Germany into a non-observant Jewish family, the son of a prosperous banker, he converted to Christianity in his late teens, and thereafter the interpretation and reinterpretation of Christianity was a consistent theme in his writings. He met and married Margrit Hüssy in 1914. In 1925, the couple legally combined their names. They had a son, Hans, in 1921.

Rosenstock-Huessy served as an officer in the German army during World War I. His experience caused him to reexamine the foundations of liberal Western culture. He then pursued an academic career in Germany as a specialist in medieval law, which was disrupted by the rise of Nazism. In 1933, after Adolf Hitler became Chancellor of Germany, he emigrated to the United States where he began a new academic career, initially at Harvard University and then at Dartmouth College, where he taught from 1935 to 1957.

Although never part of the mainstream of intellectual discussion during his lifetime, his work drew the attention of W. H. Auden, Harold Berman, Martin Marty, Lewis Mumford, Page Smith, and others. Rosenstock-Huessy may be best known as the close friend of and correspondent with Franz Rosenzweig. Their exchange of letters is considered by scholars of religion and theology to be indispensable in the study of the modern encounter of Jews with Christianity. In his work, Rosenstock-Huessy discussed speech and language as the dominant shaper of human character and abilities in every social context. He is viewed as belonging to a group of thinkers who revived post-Nietzschean religious thought.
FILTER BY
SORT BY
Sort By