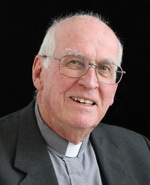 He obtained his B.S. in mathematics and Licentiate in Philosophy from Fordham University 1958, and earned a PhD in Astronomy in 1962 from Georgetown University. Lastly, he earned a Licentiate in Sacred Theology (STL) from Woodstock College in 1965 and was ordained a Roman Catholic priest.

He is currently teaching at Le Moyne College in Syracuse, NY.
FILTER BY
SORT BY
Sort By