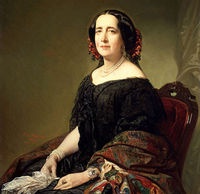 Gertrudis Gómez de Avellaneda y Arteaga (pen name La Peregrina) came from a noble background; her father, Manuel Gómez de Avellaneda, was a descendent of the royal family of Navarre and aristocracy of Vizcaya of Spain, and also a commander of the Spanish navy in charge of the central regions of Cuba. Her mother, Francisca de Arteaga y Betancourt, was also from a wealthy Spanish family that had lived in Puerto Príncipe. It is said that her mother’s family is the one that inspired the family in her first novel, Sab.

At the age of nine, her father died and her mother remarried ten months later to don Isidoro de Escalada, who was also a Spanish officer in Cuba. At 22, in 1836, she left Cuba with her family for A Coruña, Spain. Soon after, she and her brother left the family for Cádiz then Seville. When she arrived in Spain, la Avellaneda was already recognized as a talented writer. She continued to gain popularity throughout Spain by writing more literary works. When she began writing her new novel, Sab, contributions from advance subscriptions paid for its publication and she quickly became famous in Latin America.

As a child Avellaneda was not interested in feminine materials. She was given a tutor and soon became engulfed in the books she was given to read. Her mother tried unsuccessfully to get her daughter away from reading so many books and into the more accepted role of young girls. She even attempted to get Avellaneda to be more social. Although Avellaneda did not have many friends, she often took the ones she had and placed them into roles of the plays she had written, taking the male roles for herself.

As a young woman Avellaneda took a more feminine approach. She studied new fashions instead of books. She took up dancing, music, and painting. She was even engaged to a young man. It was an arranged marriage to a distant relative, she later refused to marry him. She insisted that she could not go on with the ceremony when it was not what she wanted. After rejecting the marriage, a tear in the family put la Avellaneda into a deep depression.

In Spain she had a number of tumultuous love affairs, some with prominent writers associated with Spanish Romanticism. Her affairs included several engagements to different men. The first man that Avellaneda had a love affair with was Ignacio de Cepeda, who was the focus of many of her writings, mainly love letters. (There were forty love letters total, spanning from 1839 until 1854. After his death, his widow inherited and published them.). Though she loved Cepeda very much, he did not want to pursue a marriage with her. One reason he gave was that she was not rich enough. He also gave reason that she was not feminine enough stating that she was more verbal than should be and was often too aggressive for a woman of the 19th century.

After her relationship with Cepeda ended, she went to Cádiz. There, she met and had an affair with Gabriel Garcia Tassara. He was also a poet from Seville. In 1844, she had a daughter out of wedlock with Tassara. Soon after the baby was born, Tassara left her and the baby, refusing to call her his daughter. The baby died several months later. This left Avellaneda heartbroken at the height of her career.
Gertrudis in her later years

Avellaneda soon married a younger man by the name of Pedro Sabater who worked for the Cortes and was very wealthy. He was also a writer and wrote many poems for his wife. They married on May 10, 1846. Sabater was extremely sick with what was believed to be cancer. He died shortly after their marriage leaving Avellaneda devastated. As a result, she entered a convent right after his death and wrote a play called Egilona which did not receive good reviews like her last one had.

In January 1863, she tried to enroll into the Royal Academy in after a seat belonging to a dead friend of hers became vacant. Even though she was admired by many, being a woman meant that it was not her place to be writing public
FILTER BY
SORT BY
Sort By