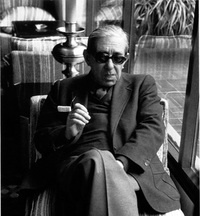 Although primarily a novelist, he also published journalism, essays, and plays. His career as a writer began in Oviedo, but developed largely in Madrid.

After moving around frequently in the later 1920s and early 1930s, including a period in Paris, he returned to Spain and linked himself to Franco's Falange party in order to save his own life and that of his family. His first novel, Javier Mariño, appeared in 1943, and he continued to publish novels almost until his death, receiving major prizes for some of them.

Despite his affiliation to the Falangists, Torrente Ballester always promoted relatively leftist ideas, and from 1939, when he returned to Santiago to take up a university post, he increasingly distanced himself from the party. He joined in protests in favour of striking Asturian miners in 1962, and was expelled from his teaching post at the university as a result. In the mid-1960s he had a number of problems with government censors.

He left Spain for a post at the State University of New York at Albany in 1966, and remained there until 1970. After his return to Spain, he was increasingly celebrated: In 1975 he was elected member of the Real Academia Española, and was awarded the premier Spanish literary prize, the Cervantes Prize, in 1985.

Immediately after his death a foundation was set up to protect, study and disseminate his work. The name of this foundation is Fundación Gonzalo Torrente Ballester and counts among its supporters the Royal House of Spain.
FILTER BY
SORT BY
Sort By