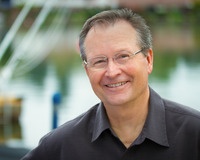 Graham Salisbury comes from a 100-year line of newspapermen, all associated with Hawaii's morning paper, the Honolulu Advertiser. Although a career as a newsman could have been possible, Salisbury chose to imagine rather than report. "I enjoy writing about characters who might have been. To me, exploring fictional themes, situations, and lives is a quietly exhilarating experience. There are times when completely unexpected happenings take place as my fingertips walk the keyboard, things that make me laugh or get all choked up or even amaze me."
Salisbury's drive to write about the emotional journey that kids must take to become adults in a challenging and complicated world is evident throughout his work. Says the author: "I've thought a lot about what my job is, or should be as an author of books for young readers. I don't write to teach, preach, lecture, or criticize, but to explore. And if my stories show characters choosing certain life options, and the possible consequences of having chosen those options, then I will have done something worthwhile."

His books -- Eyes of the Emperor, Blue Skin of the Sea, Under the Blood-Red Sun, Shark Bait, Jungle Dogs, Lord of the Deep, Island Boyz and his short stories, too -- have been celebrated widely with praise and distinguished awards. Graham Salisbury, winner of the PEN/Norma Klein Award, grew up on the islands of Oahu and Hawaii. Later, he graduated from California State University, Northridge, and received an MFA degree from Vermont College of Norwich University. In fact, he was a member of the founding faculty of Vermont College's highly successful MFA program in Writing for Children, now the Union Institute & University.

Other important things to know about this author: He worked as the skipper of a glass-bottom boat, as a deckhand on a deep-sea charter fishing boat, and as an Montessori elementary school teacher. His
rock-and-roll band, The Millennium, had a number one hit in the Philippines, which he composed. He once surfed with a shark, got stung by a Portuguese man-of-war (several times!), and swam for his life from a moray eel. Believe it or not, he didn't wear shoes until the sixth grade and never saw snow until he was nineteen. Graham Salisbury now lives with his family in Portland, Oregon.
Format
paperback
Language
english
Condition
new
used 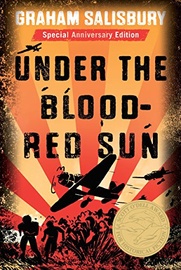 Under the Blood-Red Sun (Prisoners of the Empir...