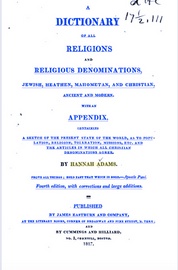 Hannah Adams (October 2, 1755 – December 15, 1831) was an American author of books on comparative religion and early United States history. She was born in Medfield, Massachusetts and died in Brookline. Adams was the first woman in the U.S. who worked professionally as a writer.She was the second of five children born to Thomas Adams and Elizabeth Clark. Born in "humble obscurity" in a remote country town, in part self-educated, she lived at a time when a learned woman in New England was a rarity. Suffering from ill-health, often poor and obliged to resort to various occupations for her sustenance, she doggedly pursued her studies. Her father, educated at Harvard College, kept a small country store, dealing among other things in books. He also boarded some students of divinity, from whom the daughter learned Greek and Latin, which she subsequently taught.Her first work, A View of Religions, was published in 1784, with a second and enlarged edition in 1791. The emolument she derived from this not only placed her in a comfortable situation, but enabled her to pay the debts she had contracted during her and her sister's illness, and lended a small sum at interest. In 1799, she published A Summary History of New-England. In gathering materials for this work, among old manuscripts, she seriously impaired her eyesight and had to employ an amanuensis to prepare the copy for the printers. Her most elaborate work, The History of the Jews since the destruction of Jerusalem, was reprinted in London in 1818 at the expense and for the benefit of the London Society for Promoting Christianity Amongst the Jews. She started an autobiography, which was published after her death by Hannah Farnham Sawyer Lee. During the later years of her life, she enjoyed a comfortable annuity, raised by her friends.
FILTER BY
SORT BY
Sort By