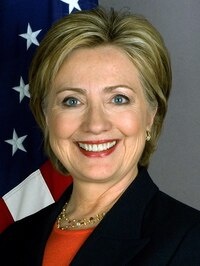 Hillary Diane Rodham Clinton (born October 26, 1947) was the 67th United States Secretary of State, serving in the cabinet of President Barack Obama. In 2016, she became the first woman in U.S. history to win a major party's presidential nomination, and the first woman to win the popular vote in a presidential race - despite losing the election.

She was a Senator from the state of New York from 2001 to 2009. As the wife of the 42nd, President of the United States, William Jefferson Clinton, Hillary served as First Lady from 1993 to 2001. In the 2008 election Clinton was a leading candidate for the Democratic presidential nomination.

A native of Illinois, Hillary Rodham attracted national attention in 1969 when she was chosen by her peers to be the first student commencement speaker at Wellesley College. As a graduate of Yale Law School, Class of 1973, she served temporarily as a Congressional legal counsel. Rodham moved to Arkansas in 1974, marrying Bill Clinton a year later. Hillary Rodham Clinton co-founded the Arkansas Advocates for Children and Families in 1977, and became the first female chair of the Legal Services Corporation in 1978. Named the first female partner at Rose Law Firm in 1979, she was twice listed as one of the 100 most influential lawyers in America. First Lady of Arkansas from 1979 to 1981 and 1983 to 1992 with husband Bill as Governor, Clinton successfully led a task force to reform Arkansas's education system. She has served on the board of directors of Wal-Mart as well as several other prominent corporations.

In 1994 as First Lady of the United States, her major initiative, the Clinton health care plan, failed to gain approval from the U.S. Congress. However, in 1997 and 1999, Clinton played a role in advocating for the establishment of the State Children's Health Insurance Program, the Adoption and Safe Families Act, and the Foster Care Independence Act. Her time as First Lady drew a polarized response from the American public. She is the only First Lady to have been subpoenaed, testifying before a federal grand jury in 1996 due to the Whitewater controversy, but was never charged with any wrongdoing in this or any of the other investigations during her husband's administration. The state of her marriage was the subject of considerable speculation following the Lewinsky scandal in 1998 that spurred Articles of Impeachment to be issued against her husband, Bill Clinton.

In January of 2000, Clinton was elected as senator to the State of New York after moving to the small suburban hamlet of Chappaqua in Westchester County. That election marked the first time an American First Lady had run for public office; Clinton was also the first female senator to represent New York. In the Senate, she initially supported the Bush administration on some foreign policy issues, including a vote for the Iraq War Resolution, subsequently opposing the administration on its conduct of the war in Iraq, and most domestic issues. Senator Clinton was re-elected by a wide margin in 2006. In the 2008 presidential nomination race, Hillary Clinton won more primaries and delegates than any other female candidate in American history, but narrowly lost to Senator Barack Obama. As Secretary of State, Clinton became the first former First Lady to serve in a president's cabinet 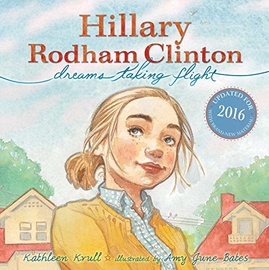 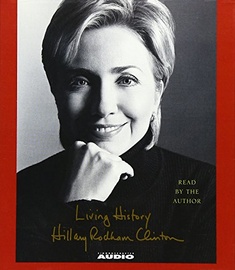