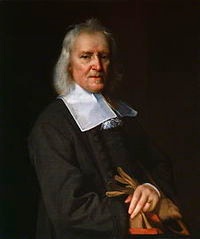 Izaak Walton (c. 1594[1] – 15 December 1683) was an English writer. Best known as the author of The Compleat Angler, he also wrote a number of short biographies that have been collected under the title of Walton's Lives.

Walton was born at Stafford c. 1594; the traditional '9 August 1593' date is based on a misinterpretation of his will, which he began on 9 August 1683.[1] The register of his baptism gives his father's name as Gervase. His father, who was an innkeeper as well as a landlord of a tavern, died before Izaak was three. His mother then married another innkeeper by the name of Bourne, who would later run the Swan in Stafford.

He settled in London where he began trading as an ironmonger in a small shop in the upper storey of Thomas Gresham's Royal Burse or Exchange in Cornhill. In 1614 he had a shop in Fleet Street, two doors west of Chancery Lane in the parish of St Dunstan's.[2] He became verger and churchwarden of the church, and a friend of the vicar, John Donne.[1] He joined the Ironmongers' Company in November 1618.[1]

Walton's first wife was Rachel Floud (married December 1626), a great-great-niece of Archbishop Cranmer. She died in 1640. He soon remarried, to Anne Ken (1646–1662), who appears as the pastoral Kenna of The Angler's Wish; she was a stepsister of Thomas Ken, afterwards bishop of Bath and Wells.

After the Royalist defeat at Marston Moor in 1644, Walton retired from his trade. He went to live just north of his birthplace, at a spot between the town of Stafford and the town of Stone, where he had bought some land edged by a small river. His new land at Shallowford included a farm, and a parcel of land; however by 1650 he was living in Clerkenwell, London. The first edition of his book The Compleat Angler was published in 1653. His second wife died in 1662, and was buried in Worcester Cathedral, where there is a monument to her memory. One of his daughters married Dr Hawkins, a prebendary of Winchester.

The last forty years of his life were spent visiting eminent clergymen and others who enjoyed fishing, compiling the biographies of people he liked, and collecting information for the Compleat Angler. After 1662 he found a home at Farnham Castle with George Morley, bishop of Winchester, to whom he dedicated his Life of George Herbert and his biography of Richard Hooker. He sometimes visited Charles Cotton in his fishing house on the Dove.

Walton died in his daughter's house at Winchester, and was buried in Winchester Cathedral.
FILTER BY
SORT BY
Sort By