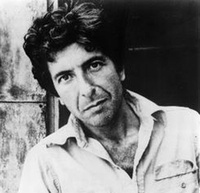 Leonard Norman Cohen was a Canadian singer-songwriter, poet and novelist. Cohen published his first book of poetry in Montreal in 1956 and his first novel in 1963.

Cohen's earliest songs (many of which appeared on the 1968 album Songs of Leonard Cohen) were rooted in European folk music melodies and instrumentation, sung in a high baritone. The 1970s were a musically restless period in which his influences broadened to encompass pop, cabaret, and world music. Since the 1980s he has typically sung in lower registers (bass baritone, sometimes bass), with accompaniment from electronic synthesizers and female backing singers.

Cohen's songs and poetry have influenced many other singer-songwriters, and more than a thousand renditions of his work have been recorded. He has been inducted into the Canadian Music Hall of Fame and the Canadian Songwriters Hall of Fame and is also a Companion of the Order of Canada, the nation's highest civilian honour. Cohen was inducted into the Rock and Roll Hall of Fame on March 10, 2008 for his status among the "highest and most influential echelon of songwriters".
FILTER BY
SORT BY
Sort By