< Back to author list
Lisa Ryan (Lisa Gail Davenport; born c. 1960) is an American author and speaker. She has had a career as a television actress, host, reporter and producer. She assumed the title of Miss California in 1982 after Debra Maffett was crowned Miss America. Ryan then re-entered and won the Miss California title in 1985. She grew up in Visalia, California, and studied communications.
Format
paperback
Language
english
Condition
used 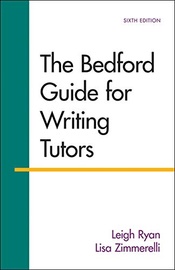 The Bedford Guide for Writing Tutors