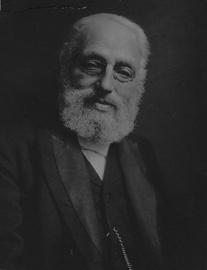 Marcus Jastrow (June 5, 1829 – October 13, 1903) was a German born American Talmudic scholar, most famously known for his authorship of the popular and comprehensive A Dictionary of the Targumim, Talmud Babli, Talmud Yerushalmi and Midrashic Literature. He was also a progressive, early reformist rabbi in America. Jastrow was born in Rogasen in the Grand Duchy of Posen, Prussia. After receiving rabbinical ordination, Ph.D., and Doctorate of Letters (D.Litt.), he became the rabbi of the then Orthodox Congregation Rodeph Shalom in Philadelphia, Pennsylvania, in 1866, at the age of thirty-seven. In 1886, he began publishing his magnum opus, A Dictionary of the Targumim, Talmud Babli, Talmud Yerushalmi and Midrashic Literature, in pamphlet form. It was finally completed and published in two-volume form in 1903, and has since become a popular resource for students of the Talmud. In the preface to this work, Jastrow sharply criticized those linguistic and etymological scholars who claimed that obscure terms in Talmudic literature are primarily derived from Greek. Jastrow held that Greek influence on Talmudic Aramaic was minimal, and that most obscure terms could be much more simply traced to Hebrew origins. Jastrow was also responsible for most Talmud-related articles in the Jewish Encyclopedia. He was the father of Joseph Jastrow, Morris Jastrow Jr., Alice Jastrow, Annie Jastrow and Nellie Jastrow. Elisabeth Jastrow, the classical archaeologist, was his niece.
Format
hardcover
Language
english
Condition
new
used 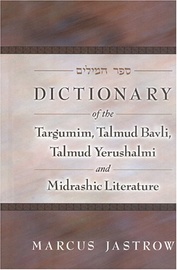