< Back to author list
Martin Chemnitz (9 November 1522 – 8 April 1586) was an eminent second-generation German, Evangelical Lutheran, Christian theologian, and a Protestant reformer, churchman, and confessor. In the Evangelical Lutheran tradition he is known as Alter Martinus, the "Second Martin": Si Martinus non fuisset, Martinus vix stetisset ("If Martin [Chemnitz] had not come along, Luther would hardly have survived") goes a common saying concerning him. He is listed and remembered in the Calendar of Saints and Commemorations in the Liturgical Church Year as a pastor and confessor by both the Evangelical Lutheran Church in America and Lutheran Church–Missouri Synod.
Format
hardcover
Language
english
Condition
new
used 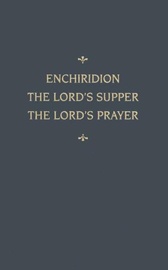