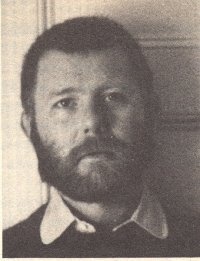 Michael McDowell is a prolific horror writer who has distinguished himself with a varied body of work within the genre. He was born in Enterprise, Alabama, in 1950 and died of AIDS-related illness in Boston, Massachusetts, in 1999.

His first horror novel, The Amulet, relates the tragedies that befall various individuals who come in possession of a supernatural pendant in a small town.

In McDowell's second novel, Cold Moon Over Babylon, a murdered woman's corpse is dispatched into a river, but her spirit roams the land, and in the evening hours it seeks revenge on her killer even as he plots the demise of her surviving relatives.

Don D'Ammassa, writing in the St. James Guide to Horror, Ghost & Gothic Writers, noted that McDowell's ability to maintain a sense of mundane normalcy against supernatural activity provides the novel with "a fine balance between reality and unreality," and he called Cold Moon Over Babylon "one of the best ghost stories ever written at novel length."

A similarly disturbing tension between dull reality and the supernatural is produced in The Elementals, wherein a host of visitors come to stay at a secluded house occupied by embodiments of elemental forces.

McDowell's Katie, meanwhile, concerns a clairvoyant serial killer whose powers of perception enable her to evade her trackers. The attractive but deranged heroine of this novel manages to conduct her murderous activities despite the awareness of her parents, who are content to derive financial gain from their daughter's crimes.

Madness is central to McDowell's Toplin, which details the vile imaginings of a man who suffers from mental illness but nonetheless determines to conduct himself within society. D'Ammassa praised Toplin as "perhaps the best novel ever written from the point of view of a schizophrenic."

Among McDowell's other writings is the six-part serial novel Blackwater, a chronicle of a southern family drawn to the supernatural. In addition, McDowell has also supplied the screenplays for various films, including director Tim Burton's horror comedy Beetlejuice and his animated production The Nightmare Before Christmas.

Stephen King called McDowell one of the "finest writers of paperback originals in America today." Tabitha King was asked to complete McDowell's unfinished novel Candles Burning, which was published in 2006 to good reviews. Concerning his career, McDowell never tried to be something he wasn't. "I am a commercial writer and I'm proud of that", he said in the book Faces of Fear in 1985. "I am writing things to be put in the bookstore next month. I think it is a mistake to try to write for the ages."
FILTER BY
SORT BY
Sort By