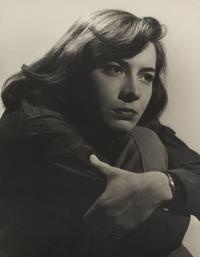 Patricia Highsmith was an American novelist who is known mainly for her psychological crime thrillers which have led to more than two dozen film adaptations over the years.

She lived with her grandmother, mother and later step-father (her mother divorced her natural father six months before 'Patsy' was born and married Stanley Highsmith) in Fort Worth before moving with her parents to New York in 1927 but returned to live with her grandmother for a year in 1933. Returning to her parents in New York, she attended public schools in New York City and later graduated from Barnard College in 1942.

Shortly after graduation her short story 'The Heroine' was published in the Harper's Bazaar magazine and it was selected as one of the 22 best stories that appeared in American magazines in 1945 and it won the O Henry award for short stories in 1946. She continued to write short stories, many of them comic book stories, and regularly earned herself a weekly $55 pay-check. During this period of her life she lived variously in New York and Mexico.

Her first suspense novel 'Strangers on a Train' published in 1950 was an immediate success with public and critics alike. The novel has been adapted for the screen three times, most notably by Alfred Hitchcock in 1951.

In 1955 her anti-hero Tom Ripley appeared in the splendid 'The Talented Mr Ripley', a book that was awarded the Grand Prix de Litterature Policiere as the best foreign mystery novel translated into French in 1957. This book, too, has been the subject of a number of film versions. Ripley appeared again in 'Ripley Under Ground' in 1970, in 'Ripley's Game' in 1974, 'The boy who Followed Ripley' in 1980 and in 'Ripley Under Water' in 1991.

Along with her acclaimed series about Ripley, she wrote 22 novels and eight short story collections plus many other short stories, often macabre, satirical or tinged with black humour. She also wrote one novel, non-mystery, under the name Claire Morgan , plus a work of non-fiction 'Plotting and Writing Suspense Fiction' and a co-written book of children's verse, 'Miranda the Panda Is on the Veranda'.

She latterly lived in England and France and was more popular in England than in her native United States. Her novel 'Deep Water', 1957, was called by the Sunday Times one of the "most brilliant analyses of psychosis in America" and Julian Symons once wrote of her "Miss Highsmith is the writer who fuses character and plot most successfully ... the most important crime novelist at present in practice." In addition, Michael Dirda observed "Europeans honoured her as a psychological novelist, part of an existentialist tradition represented by her own favorite writers, in particular Dostoevsky, Conrad, Kafka, Gide, and Camus."

She died of leukemia in Locarno, Switzerland on 4 February 1995 and her last novel, 'Small g: a Summer Idyll', was published posthumously a month later.