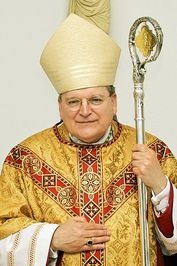 One of the world’s foremost authorities on Roman Catholic canon law, Cardinal Raymond Leo Burke leads with an unwavering passion for the integrity of Catholic doctrine embodied in the words of Jesus Christ.

Born in June 1948 in Richland Center, Wis., Cardinal Burke’s path to the priesthood took him to Rome, where he was ordained by Pope Paul VI on June 29, 1975. One of his first assignments was teaching religion at Aquinas High School in La Crosse, Wis. His call to serve God has been expressed through a scholarly devotion to faith. He studied canon law at the Pontifical Gregorian University in Rome and later became the first American to hold the position of Defender of the Bond of the Supreme Tribunal of the Apostolic Signatura, the church’s highest court. He now serves as a member of the College of Judges of the Supreme Tribunal of the Apostolic Signatura, of the Congregation for the Clergy, and of the Pontifical Council for Legislative Texts. He was appointed Prefect of the Supreme Tribunal of the Apostolic Signatura by His Holiness Pope Benedict XVI, on June 27, 2008.