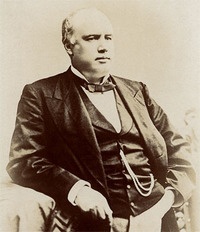 "On August 11, 1833, was born the greatest and noblest of the Western World; an immense personality, -- unique, lovable, sublime; the peerless orator of all time, and as true a poet as Nature ever held in tender clasp upon her loving breast, and, in words coined for the chosen few, told of the joys and sorrows, hopes, dreams, and fears of universal life; a patriot whose golden words and deathless deeds were worthy of the Great Republic; a philanthropist, real and genuine; a philosopher whose central theme was human love, -- who placed 'the holy hearth of home' higher than the altar of any god; an iconoclast, a builder -- a reformer, perfectly poised, absolutely honest, and as fearless as truth itself -- the most aggressive and formidable foe of superstition -- the most valiant champion of reason -- Robert G. Ingersoll." - Herman E. Kittredge

Robert Green Ingersoll, who became the best known advocate of freethought in the 19th-century, was born in Dresden, N.Y. The son of an impoverished itinerant pastor, he later recalled his formative church experiences: "The minister asked us if we knew that we all deserved to go to hell, and we all answered 'yes.' Then we were asked if we would be willing to go to hell if it was God's will, and every little liar shouted 'Yes!'" He became an attorney by apprenticeship, and a colonel in the Civil War, fighting in the Battle of Shiloh. In 1867, Ingersoll was appointed Illinois' first Attorney General. His political career was cut short by his refusal to halt his controversial lectures, but he achieved national political fame for his thrilling nomination speech for James G. Blaine for president at the national convention of the Republican Party in 1876. Ingersoll was good friends with three U.S. presidents. The distinguished attorney was known and admired by most of the leading progressives and thinkers of his day.

Ingersoll traveled the continent for 30 years, speaking to capacity audiences, once attracting 50,000 people to a lecture in Chicago—40,000 too many for the Exposition Center. His repertoire included 3 to 4-hour lectures on Shakespeare, Voltaire and Burns, but the largest crowds turned out to hear him denounce the bible and religion. He initially settled in Peoria, Illinois, then in Washington, D.C., where he successfully defended falsely accused men in the "Star Route" scandal, the most famous political trial of the 19th century. Religious rumors against Ingersoll abounded. One had it that Ingersoll's son was a drunkard who more than once had to be carried away from the table. Ingersoll wrote: "It is not true that intoxicating beverages are served at my table. It is not true that my son ever was drunk. It is not true that he had to be carried away from the table. Besides, I have no son!"

During the Civil War he was commissioned as Colonel and commander of the 11th Illinois Volunteer Cavalry, and was captured near Corinth, Mississippi. Although soon released, he still made time to treat his Confederate captors to a rousing anti slavery speech.

He hoped for but was never awarded a Cabinet post. The Republicans were afraid of his unorthodox religious views. He was told that he could progress politically if he hid his religious views, but Ingersoll refused on the charge that withholding information from the public would be immoral.

He strongly advocated equal rights for blacks and women. He defended Susan B. Anthony from hecklers when she spoke in Peoria; when every hotel in the city refused to house Frederick Douglass, he welcomed him into his home.

http://en.wikipedia.org/wiki/Robert_G...
FILTER BY
SORT BY
Sort By