Rudolf Flesch (8 May 1911 – 5 October 1986) was an author, readability expert, and writing consultant who was an early and vigorous proponent of plain English in the United States. He created the Flesch Reading Ease test and was co-creator of the Flesch-Kincaid Readability Test. He was raised in Austria and finished university there, studying law. He then moved to the United States and entered a graduate program at Columbia University, where he earned a Ph.D in English.

Flesch was born in Vienna, Austria. He fled to the United States to avoid the imminent invasion of the Nazis, to avoid Jewish prosecution. Once in America, he met Elizabeth Terpenning, whom he married. They had six children: Anne, Hugo, Jillian, Katrina, Abigal, and Janet. Flesch lived the majority of his life with his wife and children in Dobbs Ferry, New York, a small village in southern Westchester county.
[edit] Professional Information

Not long after finishing his degree, he wrote what became his most famous book, Why Johnny Can't Read, in 1955. The book was a focused critique of the then-trendy movement to teach reading by sight, often called the "look-say" method. The flaw of this approach, according to Flesch, was that it required learners to memorize words by sight. When confronted with an unknown word, the learner was stumped. Flesch advocated a return to phonics, the teaching of reading by teaching learners to sound out words.

Flesch flourished as a writing teacher, plain-English consultant, and author. He wrote many books on the subject of clear, effective communication: How to Test Readability (1951), How to Write Better (1951), The Art of Plain Talk (1946), The Art of Readable Writing (1949), The ABC of Style: A Guide to Plain English (1964), and Rudolf Flesch on Business Communications: How to Say What You Mean in Plain English (1972).

In The Art of Clear Thinking (1951), Flesch consolidates research data and then-recent findings from the fields of psychology and education, and suggests how his readers can apply that information in their daily life. As he writes in his introduction, "It would be impudent to tell intelligent, grown up people how to think. All I have tried to do here is to assemble certain known facts about the human mind and put them in plain English."

In Lite English (1983), Flesch advocated the use of many colloquial and informal words. The subtitle of the book reveals his bias: Popular Words That Are OK to Use No Matter What William Safire, John Simon, Edwin Newman, and the Other Purists Say!

And in 1979, Flesch published a book he had produced while working as a communication and writing consultant to the Federal Communications Commission: How to Write Plain English: A Book for Lawyers and Consumers. This book was and is a "how to" for writing rules and regulations that must be read and understood by the general public.
Format
paperback
Language
english
Condition
new
used 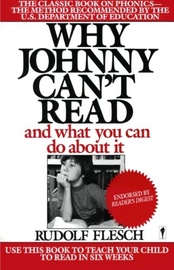 Why Johnny Can't Read: And What You Can Do abou...