Thomas Hibbs is currently Distinguished Professor of Ethics & Culture and Dean of the Honors College at Baylor University.

With degrees from the University of Dallas and the University of Notre Dame, Hibbs taught at Boston College (BC) for 13 years, where he was full professor and department chair in philosophy. At BC, he also served on the Steering Committee for BC's Initiative for the Future of the Church and on the Sub-Committee on Catholic Sexual Teaching. At Baylor, he has been involved in ecumenical discussions of the work of John Courtney Murray and John Paul II.

In addition to teaching a variety of interdisciplinary courses, Hibbs teaches in the fields of medieval philosophy, contemporary virtue ethics, and philosophy and popular culture. Hibbs' popular BC course on Nihilism in American Culture was featured in a Boston Globe article.

Hibbs has written scholarly books on Aquinas, including Dialectic and Narrative in Aquinas: An Interpretation of the Summa Contra Gentiles, and a book on popular culture entitled Shows About Nothing. Hibbs has recently published scholarly articles on MacIntyre and Aquinas (Review of Politics), on Anselm (Anselm Studies), and on Pascal (International Philosophical Quarterly). He also has written on film, culture, books and higher education in Books and Culture, Christianity Today, First Things, New Atlantis, The Dallas Morning News, The National Review, The Weekly Standard, and The Chronicle of Higher Education, for which his latest piece is a study of the ethical implications of the films of the Polish director Krzysztof Kieslowski.

Called upon regularly to comment on film and popular culture, Hibbs has made more than 100 appearances on radio, including nationally syndicated NPR shows such as "The Connection," "On the Media" and "All Things Considered," as well as local NPR stations in Boston, Massachusetts; Ann Arbor, Michigan; Dallas, Texas; and Rochester, New York.
Format
paperback
Language
english
Condition
used 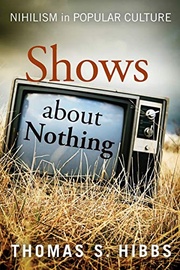 Shows about Nothing: Nihilism in Popular Culture