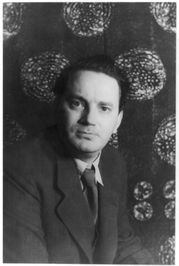 Wolfe wrote four lengthy novels, plus many short stories, dramatic works and novellas. He is known for mixing highly original, poetic, rhapsodic, and impressionistic prose with autobiographical writing. His books, written and published from the 1920s to the 1940s, vividly reflect on American culture and the mores of that period, albeit filtered through Wolfe's sensitive, sophisticated and hyper-analytical perspective. He became widely known during his own lifetime.

Wolfe inspired the works of many other authors, including Betty Smith with A Tree Grows in Brooklyn, Robert Morgan, author of Gap Creek, and Prince of Tides author Pat Conroy, who has said, "My writing career began the instant I finished Look Homeward, Angel." Jack Kerouac idolized Wolfe. Ray Bradbury was influenced by Wolfe, and included him as a character in his books.

(from Wikipedia)
FILTER BY
SORT BY
Sort By