< Back to author list
The World Communion of Reformed Churches (WCRC) is the largest association of Calvinist churches in the world. It has 230 member denominations in 108 countries, together claiming an estimated 80 million people, thus being the fourth-largest Christian communion in the world after the Catholic Church, Eastern Orthodox Church, and the Anglican Communion. This ecumenical Christian body was formed in June 2010 by the union of the World Alliance of Reformed Churches (WARC) and the Reformed Ecumenical Council (REC).Among the biggest denominations in the WCRC are the Church of South India, Presbyterian Church of East Africa, Presbyterian Church of Korea, Ethiopian Evangelical Church Mekane Yesus, Church of Jesus Christ in Madagascar, Federation of Swiss Protestant Churches, Protestant Church in Indonesia, Presbyterian Church (USA), Evangelical Church of Cameroon, Borneo Evangelical (SIB Malaysia) and the Protestant Church in the Netherlands. Its member denominations on the whole could be considered more liberal than the member denominations of the International Conference of Reformed Churches or the World Reformed Fellowship, which are also large ecumenical Calvinist organizations.
Format
paperback
Language
english
Condition
new
used 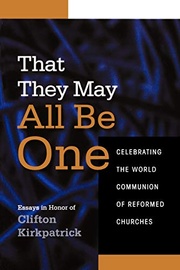 That They May All Be One: Celebrating the World...