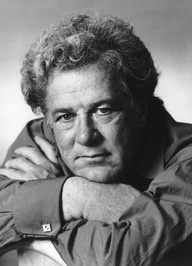 David Benedictus is an English-Jewish writer and theatre director, best known for his novels. His most recent work is the Winnie-the-Pooh novel Return to the Hundred Acre Wood (2009). It was the first such book in 81 years.
He was educated at Eton College, Oxford and the University of Iowa. His second novel, You're a Big Boy Now, was made into a 1966 feature film directed by Francis Ford Coppola. He was an assistant to Trevor Nunn at the Royal Shakespeare Company. He has also worked as a Commissioning Editor for Drama at Channel 4, and ran the Book at Bedtime series for BBC Radio 4.
He previously wrote and produced audio readings of the Pooh stories, with Judi Dench as Kanga and Geoffrey Palmer as Eeyore. He sent the trustees of the A. A. Milne estate two sample stories of his sequel, and it took more than ten years for them to approve the project.
Upon the book's publication he admitted to nerves over its reception, saying, "At worst, everyone will hate me and I'll just crawl under a bush and hide – I can live with that...some people do hate the whole idea of a sequel, but it's not as if I'm doing any damage to the original, that will still be there. My hope is that people will finish reading a cracking story and just want more of them, and that's where I come in."[2] Michael Brown, chairman of the Pooh Properties Trust, said Benedictus had a "wonderful feel" for the world of Pooh.
According to an interview he gave to the Israeli newspaper Yediot Aharonot in 2009, he claimed that his cousin did a research about his surname and found out it was actually "Baruch" (ברוך - meaning same as "Benedictus" in Hebrew) upon his ancestors came to Britain, and that they have Yemenite Jewish heritage.
He published an autobiography, Dropping Names, in 2005.
He is fond of chess and plays for a South London chess club. He also runs a horse racing tipster website.
Benedictus commented on his work in 1985, "Given peace of mind, financial independence, and a modicum of luck, I may produce a novel to be proud of one day.
Format
hardcover
paperback
Language
english
Condition
new
used 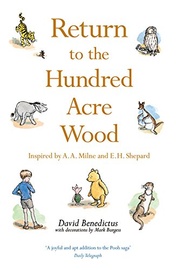 Return to the Hundred Acre Wood: In Which Winni... 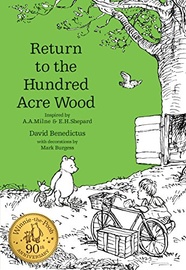