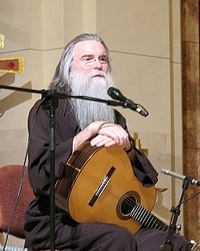 Talbot was born into a Methodist family with a musical background in Oklahoma City, Oklahoma, and started learning to play the guitar at an early age. At age 15 he dropped out of school and was performing as a guitarist for Mason Proffit, a country folk-rock band formed with his older brother Terry.

Talbot embarked on a spiritual journey that led him through Native American religion and Buddhism to Christianity. At this point he and his brother, Terry, joined the Jesus Movement, recording the album Reborn which was re-released by Sparrow Records (originally released as "The Talbot Bros." on the Warner Brothers label).

Two solo albums followed for Talbot: John Michael Talbot (1976) and The New Earth (1977). Both of these were produced by Billy Ray Hearn. Reading the life of Saint Francis of Assisi, he was inspired to begin studying at a Franciscan center in Indianapolis. He became a Roman Catholic and joined the Secular Franciscan Order in 1978. He started a house of prayer, The Little Portion.

Talbot moved The Little Portion to Eureka Springs, Arkansas on land he had purchased during his Mason Proffit days. He formed his own community, the Brothers and Sisters of Charity, at Little Portion Hermitage as an "integrated monastic community" with celibate brothers and sisters, singles, and families. By 1989, Talbot had married Viola Pratka (with the permission of the Catholic Church). Pratka was a former Incarnate Word Sister who had come to the community in 1986.

Talbot's title is General Minister and Spiritual Father. For many years, he has promoted the work of Mercy Corps.

The hermitage suffered a fire in April 2008 in which the library and many common areas were destroyed.
FILTER BY
SORT BY
Sort By