< Back to author list
Joshamee Gibbs (often referred to as Mr. Gibbs or Master Gibbs) is a fictional character in the Pirates of the Caribbean film series. Alongside Jack Sparrow and Hector Barbossa, he is one of the few characters to appear in every film. Gibbs is portrayed by Kevin McNally in the films. He is voiced by Steven Blum in video game adaptations (except for the At World's End video game, Disney Infinity, Kingdom Hearts III, and Sea of Thieves: A Pirate's Life, a 5 part Pirate's of the Caribbean adventure DLC released in June 2021, in which McNally reprised his role). Writer Terry Rossio has said he actually considers Gibbs to be the most virtuous character in the series.
Format
paperback
Language
english
Condition
new
used 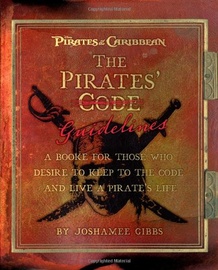 The Pirate Guidelines: A Book for Those Who Des...