Michael John Carley received his B.A. from Hampshire College and his M.F.A. from Columbia University. As the Founder, and first Executive Director of GRASP, the largest organization comprised of adults on the autism spectrum, he spoke at over 100 conferences, hospitals, universities, and health care organizations. As the Executive Director of ASTEP, he spoke at conferences focusing on Human Resources, Corporate Diversity & Inclusion, and he conducted numerous trainings and webinars for individual Fortune 1000 companies.

He has appeared in the media widely, most notably in the New York Times, Washington Post, NY Newsday, the London Times, HuffPost Live, NEWSWEEK OnAir, ABCNews, BBC News, FOX News Network, the Chronicle of Philanthropy, the Chronicle of Higher Education, Psychology Today, Exceptional Parent Magazine, and on radio with Terry Gross’ Fresh Air, and The Infinite Mind. NPR News also aired a 12-minute story in June of 2006 that featured he and GRASP. Carley was also featured in the documentaries, "On the Spectrum," and "Off the Rails."

He was one of two people on the spectrum to address Congress in their first-ever hearings on autism, he has addressed the United Nations, and his articles have been published in magazines such as Autism Spectrum News, Autism Spectrum Quarterly, and Autism/Asperger Digest. He has two columns with the Huffington Post (the national "Autism Without Fear," and the more local "Autism Without Fear—Green Bay Edition") and his third book, "The Book of Happy, Positive, and Confident Sex for Adults on the Autism Spectrum...and Beyond!", will be out in 2018.

He was the inaugural FAR Fund Fellow in 2003; and he has since received NYFAC's Ben Kramer Award (2008), the BCID Award for Service (2009), Columbia University's Herbert M. Cohen Lecture (2011), and Eden II's Peter McGowan & John Potterfield Achievement Award (2011). He also proudly sits on the Advisory Boards of GallopNYC, CHASE, Autism Asperger Network Magazine, and he is on the Board of Directors of NEXT for Autism..

Until 2001, Mr. Carley was the United Nations Representative of Veterans for Peace, Inc. In that time, he was known primarily for his work in Bosnia, and in Iraq as the Project Director of the internationally acclaimed Iraq Water Project. Prior to 2001 he was also a playwright who enjoyed 15 productions and 10 readings of his plays in New York.

Along with his (then) 4-year old son, he was diagnosed with AS in November of 2000. He lives with his wife, Kathryn Herzog, and 2 sons in Green Bay, Wisconsin, where, after decades of New York City, they recently moved to the Midwest where he is now a state-wide School Consultant.
Condition
new
used 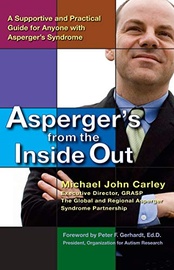 Asperger's From the Inside Out: A Supportive an...