< Back to author list
Richard A. Horsley was the Distinguished Professor of Liberal Arts and the Study of Religion at the University of Massachusetts Boston until his retirement in 2007.He described his view of the historical Jesus in these words (Jesus and the Spiral of Violence, pp. 207–208): The focal concern of the kingdom of God in Jesus’ preaching and practice, however, is the liberation and welfare of the people. Jesus’ understanding of the "kingdom of God" is similar in its broader perspective to the confident hopes expressed in then-contemporary Jewish apocalyptic literature. That is, he had utter confidence that God was restoring the life of the society, and that this would mean judgment for those who oppressed the people and vindication for those who faithfully adhered to God’s will and responded to the kingdom. That is, God was imminently and presently effecting a historical transformation. In modern parlance that would be labeled a "revolution." Horsley has a PhD from Harvard and previously taught at Wesleyan University.
Format
paperback
Language
english
Condition
new
used

Books By Richard A. Horsley 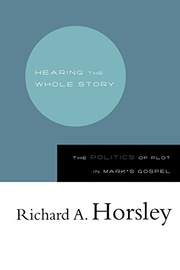