< Back to author list
Thomas O'Loughlin (born 1958, Dublin) is Professor of Historical Theology at the University of Nottingham. He earned a BA, MPhil, PhD (NUI), STB (Maynooth) and DD hon.c (Bangor). Tom studied for his BA in Philosophy and Medieval History at University College Dublin, before going to Maynooth College for his BD(STB), then moving back to do an MPhil. He holds a Diploma in Theology from Mater Dei in Dublin, and a Diploma in Pastoral Theology from All Hallows College, Dublin. O'Loughlin began his career as a teacher at University College Dublin, and also taught at the Dominican Studium, Tallaght and the Milltown Institute of Theology and Philosophy. He was later made a scholar at the School of Celtic Studies in the Dublin Institute for Advanced Studies. In 1997, he worked in the Department of Theology and Religious Studies in the University of Wales, Lampeter, where he became the first Professor of Historical Theology in the University of Wales in February 2006. He joined the University of Nottingham in 2009. He is a priest of the Catholic diocese of Arundel and Brighton.[1] His research has focused on the theology of the early medieval period, and on the works of insular writers in particular.Fr. O'Loughlin has contributed to many periodicals and journals such as the Irish Theological Quarterly, Milltown Studies, The Tablet, Cambrian Medieval Celtic Studies, Doctrine and Life and The Furrow O'Loughlin is chief editor of the Brepols series: Studia Traditionis Theologiae. He has also served as president of the Catholic Theological Association of Great Britain. In 2020 he was admitted as a member of the Royal Irish Academy.
Format
paperback
Language
english
Condition
new
used 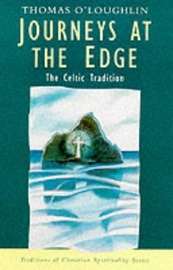 Journeys on the Edges: The Celtic Tradition (Tr...